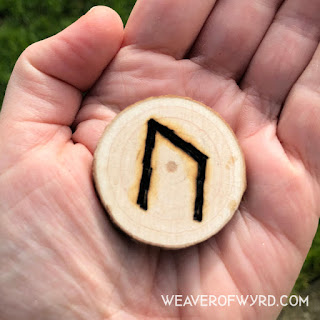 Uruz is a rune of power and it is the the second rune of Frey's aett. The original meaning of the glyph is 'aurochs,' the primeval wild ox that our hunter ancestors prized so highly. Because our association with the aurochs is much older than that with domesticated cattle, some argue that Uruz is the original first letter of the rune alphabet. Hence 'uthark' vs futhark.

Etymologically uruz also links to our origins. Any word begining with 'ur' in Swedish, for instance, speak of ancient origins. For instance, the word ancient itself is uråldrig in Swedish.

My personal take on this rune is that there is a much deeper meaning for this rune which deals with our genetic origins - Origins that are coded in our blood. On this level, we are looking at true human DNA versus hybrid empathy bypass (psycopathic) DNA that came in later in order to manipulate Earth's population.

The reason the runes are such a powerful tool is that they can help free us from entrainment by those who seek to keep humanity as a slave race. I'm speaking of both the visual and the sound vibrations of the runes. Yes, the runes really are that powerful.

Uruz can signify a relationship that makes you stronger together with Gebo - a dynamic partner ship but potentially filled with conflict (see surrounding runes if power struggles are indicated). Together with Fehu, it means success in business, provided you are willing to work hard and face your fears. It's generally a good rune for health, signifying a strong healthy flow of life force energy.

Uruz is an all around healer with strong regenerative power and can be used in combination with other runes for more targeted healing. The mysterious ALU (ansuz, laguz, uruz) is considered a protective bindrune.

Freya Aswynn suggests using Uruz with Sowilo and Ansuz for healing in her book Northern Mysteries and Magick (affiliate link).

Fortify yourself with Uruz when you are going through any form of awakening or initiation, as it will help you stay grounded.

The colour blood red is associated with Uruz and this is also the reason why the runes are often drawn with this colour - It gives each rune more power.

Use Uruz together with runes specific to any area where you need more courage.

Chant the Uruz rune while drumming if you are experiencing apathy, have difficulty staying grounded or if you are feeling drained.

Check out the Uruz Tarot spread to understand this rune more deeply.