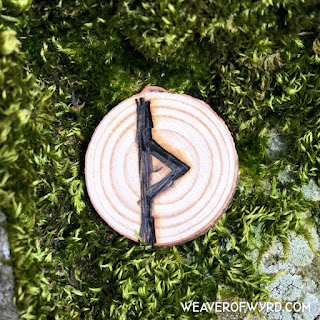 Thurisaz is the third rune in the first aett (Frey's aett) of the Elder Futhark rune alphabet. Like Uruz, it is a rune of enormous power and it relates to the giant Ymir from whose body the earth and all life on it was created in the Norse creation myth. 'Thurs' means frost giant in Old Norse. The frost giants are in constant battle with the forces of order and creation, yet without these Elemental beings, there would be no life.

Thurisaz is a rune of adversity (that which doesn't kill you makes you stronger) and resistance. It is also a rune that can help us break through any resistance. It relates both to the world of the Jotun and the world of the Aesir where it becomes Thor's hammer, bane of all foes and obstacles. It is creation out of chaos and destruction all rolled into one.

This rune is known as 'thorn' in the Saxon rune row and it is shaped like thorn. The colour associations are deep red, dark brown, black and grey.

As you may have guessed, there is nothing light and breezy about this rune showing up in a reading. Healthwise it usually relates to the liver, eyes, male sexual organs, muscles and the heart. When it shows up in a reading for a woman, it can indicate problems with female reproductive health due to an overabundance of testosterone. No matter what you are reading on, Thurisaz can indicate a foe or destructive force that you need to protect yourself against. Thurisaz together with Hagalaz has a warlike feel to it; it may not mean war but you'd better batten down the hatches!

Whether the reading is about love, work or health, Thurisaz brings and explosive and potentially disruptive element to the situation. You can think of it as sign to proceed with caution and to ponder how to protect yourself from harm.

Thurisaz brings power that can be harnessed for good too, of course, as in the case of Thor's hammer Mjölnir. The trick is to learn how to get the hammer to return to your hand, a trick that requires discipline and restraint. It's no good just knowing how to unleash force; you must know your own limitations as well as how much force to use or the hammer won't return at all or it will return with a full blow to your head instead of landing with the handle in your hand.

Thurisaz can be used in curses and also for protection. For protection use it together with Algiz and Isa to bind the enemy. To protect yourself, draw the rune facing out from the centre; to curse, draw the rune with the thorn facing toward your enemy.

In a situation where the threat is imminent, you can make a bindstave of Thurisaz with Isa (binding the enemy) and Raidho (speeding up the effect).

Use Thurisaz with Ansuz and Algiz to break and curses or fetters.

IN GENERAL: Use with CAUTION! Thurisaz is a rune of enormous destructive potential. It is not a rune to experiment with too liberally if you are new to runestaves.