The Calling of a Seer 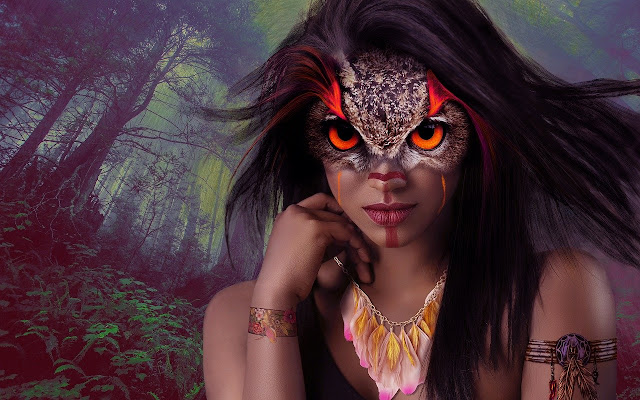 When I received my calling to become a Seer, I was on the Other side of the 3D veil - In other words, I was born this way. From as soon as I was able to speak (which I started doing at 6 months), I uttered prophecies and words of wisdom, channelled from Spirit. I had out-of-body experiences and saw spirits.

From as soon as I was able to read (I taught myself before I started school), I was drawn to literature about divination or anything mystical and I was especially fascinated by Numerology and Astrology from a very early age. Divination with cards came later, one summer's day when I was 15 years old.

I was in our Stockholm flat and had just finished cutting out a cardboard copy of the 22 Tarot Majors that came with a magazine my dad must have bought when my friend phoned and asked if I wanted to meet up with her.

I invited her around, eager to have someone to practice with even though I knew nothing about traditional card meanings or even how to do a layout with the cards. In my gut, I knew I alreadly knew how to do this.

My friend didn't mind me using her as a 'guinea pig' that day but I'm pretty sure she might have hesitated more if she knew what would follow...

As I lay the cards out (5 in a row, following my gut instinct), my eyes were drawn to The Emperor, followed by The Devil. My mouth opened and I began to speak:

'I see an older man around you. He is abusive.'

That was all I could say before my friend was in floods of tears. 'Yes, that's right,' she whispered, struggling to hold the tears back. 'He's my step dad and he has been abusing me sexually.'

My friend had been afraid to tell anybody because she felt that nobody would believe her. Her stepdad was a priest in the Swedish Lutheran Church, so who would take her word for it? Thankfully, that day become the turning point that put an end to the abuse.

That day was the day when I received my official calling to become a Tarot reader but I'm not going to lie - I was spooked and it would be many more years before my Tarot studies began in earnest... and after that even more years before I regained my confidence completely and re-membered who I am.

Even so, Spirit made sure there could be no doubt about my calling that year. Later that same summer, I was on holiday in the UK. I stepped into a metaphysical bookshop. The man at the till froze when I walked in and from his mouth came the words 'You will be a Tarot reader one day.' That was all he said and I'm not even sure he remembered his words when he came out of the brief trance.

If you are passionate about something spiritual, you have to trust that passion. The fire was lit inside your heart for a reason - This is how you are meant to serve your people. You are meant to serve in the way that brings you the most joy... but it begins with having faith in yourself and your talents and abilities.

Spirit can only work with those who walk in faith and keeping our faith strong is an ongoing task. We use little rituals that keep us strong in the faith. We use prayer and meditation. We get accustomed to acting on our inner guidance because every time we do, that too strengthens our faith.

Finally, we encourage each other - Those of us who share in this calling are family, no matter what our cultural background is. You can read about a harrowing childhood experience that many of us have in common HERE!