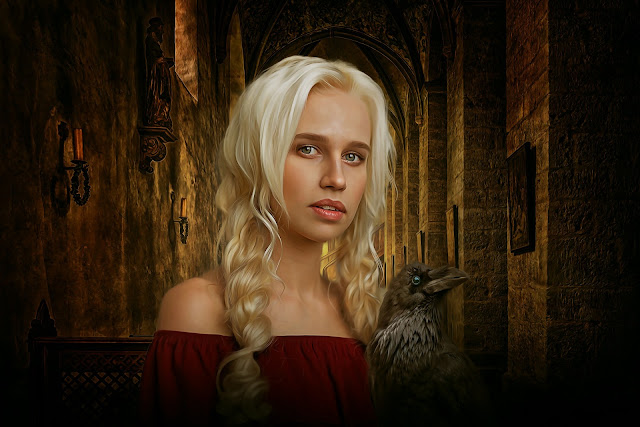 Today, I'm blogging a response to an article on Medium because I stumbled on this article right after my daily Oracle post (which was very much about reclaiming ancestral roots), and felt deeply moved to rebutt the notion that white people have no right to reclaim their ancestry or tribal roots.


"White people already have a bunch of ancestry. We’ve recorded it for centuries. Other peoples are not so fortunate because white supremacists ensured that they would not have family history through slavery or genocide.

So all that you’re doing by 'reclaiming ancestry' is defining something that can be used to discriminate against others, NOT of your ancestry, and put us all into categories.

I say, drop the idea RIGHT NOW, that anyone is 'reclaiming' anything.
You are already white."

The article is quite obviously written by an American because the emphasis on colour is evident. We don't tend to colour sort people as much here in Northern Europe. It always baffled me that colour should be the main criteria for whether people have a right to their tribal roots or not.

The fact that some white people use ancestry to bolster racism doesn't give ANYBODY the right to take my ancestral roots away from me, any more than Christians should be told they must be racist for claiming the Christian faith because 'KKK'  or all people from the Middle East labeled terrorists because of ISIS.

It wasn't long ago, I unfriended one of the PC police who claimed I had no right to use the term 'spirit animal' because I am white (she went to great lengths to shame me for it). What Christianity stole from my ancestors (who did indeed believe in guidance from spirit animals) is not hers to deprive me of further.

My response on Medium:


"I speak for Frideborg, the first Swedish woman who converted to Christianity. We don’t know how much duress she was under when she made this conversion but much of Scandinavia was Christianised under the sword, as you may be aware, and as close in history as the 1700’s, Saami shamans were burned to death if they refused to give up their drums.

As far as I know my Norse and Saami ancestors lived in peace until Romanitas took over and Scandinvia was Christianised, initially by the Catholic Church and later on by the Lutheran church — both of whom had no qualms about marrying the State for gold and power.

I speak for Frideborg because my parents named me after her. I didn’t have a choice in this, just as the original Frideborg probably didn’t have a say when she was forced to tow the line under a new religion. I speak for someone who was forced to abandon her lineage because my Norse and Saami ancestors knew they were descended from the gods. They knew that we are in constant communion with all ancestors, gods and human alike.

Imagine the power that comes from knowing this, from knowing that we were not just dumped here and that our ultimate fate (eternity in Paradise or Hell) did not depend on making a declaration of faith but on our hamingja (i.e. the continuation of of life force energy through the ancestral bloodline).

So much knowledge was lost. I don’t know what’s worse — the loss of knowledge or the disconnect from Nature… but forced Christianisation caused both. I speak for Frideborg when I say that before I reclaimed my ancestral roots, I felt homeless. You can, of course, claim that, by virtue of being white (mostly), I have no right to my tribal roots. Thankfully, I can, by virtue of being an autonomous human reclaim my power regardless of your opinion of me.

Reclaiming our ancestry doesn’t make us racist (and is not a threat to other cultures-- couldn't edit this bit on Medium since comments don't allow for edits). It moves us back in contact with nature and helps us remember ancient knowledge that has been lost for too long."

I wish this 'us vs them' mentality would stop - especially when it comes to white people hating themselves so much for being white that they divide themselves against themselves. We all need to come together in love. But first, some must heal their self-hatred and the need to debase themselves and their ancestral heritage in public-- It isn't helping anybody.