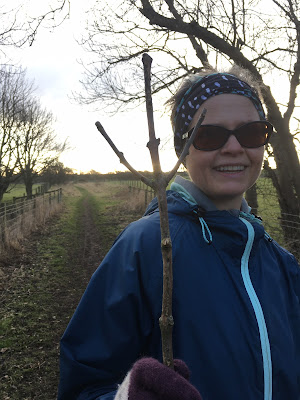 Since I started meditating daily with the Elder Futhark runes, they have started whispering to me and now Mother Earth herself is communicating with me via the runes. She is sending an SOS. Yesterday, I found a four foot Hagalaz rune when walking the dogs. 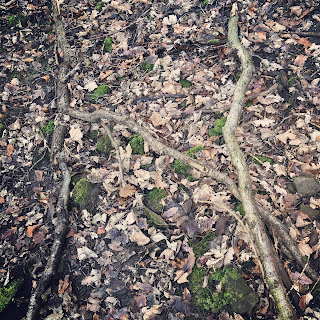 Today, I first came across a six-foot reversed Algiz rune (uh oh!) but less than half a mile further down the road, I stumbled across the (much smaller) upright Algiz rune you see me holding in the picture at the top of the post. 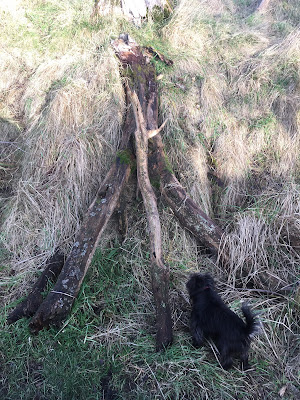 So what does this mean? Hagalaz is a rune of destruction and the reversed Algiz rune is often associated with death. We are killing our planet and each other. The message is clear and I don't feel I need to elaborate.

I am aware that a lot of people who are reading this have lost hope or are in the process of losing what scant hope they had of humanity turning the state of affairs around.

So what should we do? Is it business as usual, as media would have us believe? I shared my thoughts on this in today's oracle on Instagram:

Now is NOT the time to give up - Now is the time to declare war on those who seek to destroy us. I don't mean the kind of war that adds to the hatred and destruction but the kind of war that freed slaves and gave women the right to vote. Peaceful protests is the way forward. Either way, sacrifices have to be made. In the words of fellow Swede Greta Thunberg, 'We have to step outside our comfort zone' in light of what we are actually up against.

I signed up to join Extinction Rebellion today. I won't lose hope, not now. When we lose all hope we become paralysed. Move and allow yourself to be moved. Act. This year is the final year when we get a chance to turn things around. I'm aware that some say it is already too late... and yes, it is for all the species that have been made extinct because of human idiocy and greed. But it is not too late for me to fight for my unborn grandchildren, so I will.

January 08, 2020
The Full Moon is a time of potent magick and illumination of things that have been hidden. It is also a time of culmination for whatever was begun during the New Moon. However, the effects of eclipses are said to culminate more slowly and our most recent New Moon solar eclipse in Capricorn on the 26th is something we will only see the full effect of in the summer of 2020.

We are coming up to a Full Moon lunar eclipse in Cancer on 10 January (7:21 PM UK time). I'm not going to go into various Pagans names for this lunation. It's labeled a 'Wolf Moon' in New Age pop spirituality, as if all indigenous peoples used the same Moon names or as if only one tribe counts. 'Wolf Moon' sounds cool though... I guess that's why it's made its way out in the world via social media.

The truth of the matter is that many of the Moon names used by our Pagan ancestors have been lost. They were, for the main part, an oral tradition and when the solar xtian calendar was intr…
Post a Comment
Read more

January 14, 2020
This morning I came across a post on Patheos Pagan that was written in response to an article published in the Independent. The pagan author was justifiably upset about how witchcraft was being portrayed in the news. The aim of the article in the Independent is clearly to mock people with an irrational belief in magick that goes against science, lumping witches together with climate change deniers and anti-vaxxers.

Welcome to the new-old version of the witch burning times, my friends.

The original article from 12 January 2020 is nothing short of laughable because the author, Ceri Radford, mentions confirmation bias in the idiotic paragraph where she 'explains' divination to us while being in blatant denial about how her own confirmation bias shaped her experiment of 'becoming a witch in one week.'

It's a bit like someone trying to become an astrophysicist in a week and ending up debunking astrophysics because they can't explain it. Silly girl.

It would be bett…
2 comments
Read more

January 02, 2020
So much has happened in the maddening crescendo leading up to the Saturn-Pluto conjunction on the 12th of January, 2020. I could talk about everything that has happened in the past year and how much my life has changed since I started reconnecting with the shamanic path of my ancestors. Words would fail.

Suffice it to say, roots are going down deep into the black and fertile soil. The whispers and drumbeats from Saivo nourish my soul daily.

I could talk about the increasing pressure of the upcoming Saturn-Pluto conjunction and what tremblings are going through my nervous system as this conjunction will be exact on my 50th solar return and conjunct not just my natal Sun but also my natal Venus and Mercury.

But I'm not going to prattle on about that. I'm going to let the awesome song by Seidrblot below sum it up instead...

Everything about this music video is giving me all the feels right now.