Connecting with Ymir and the Jotunar 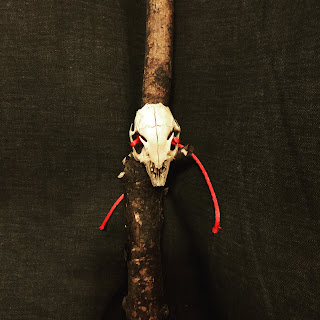 New Moon solar eclipse in Capricorn blessings, my friends! I have been Norse mythology bingeing both with videos and books over the holidays. Yesterday, I finished watching an excellent video about Ymir by Arith Härger and that is probably by this video about the Jotun and Ymir by Freyia Norling showed up in my feed not long after. I highly recommend watching both! It was the latter that inspired me to take action and to perform a ritual to Ymir today but having the theoretical underpinning felt important, so I'm grateful to both teachers on this path.

I have personally always felt drawn to the Jotuns and the elemental forces of creation. The first Norse goddess I felt a really strong pull toward was Hel, the Goddess of the Underworld. Some personal stuff happened that was very much related to her realm and I think it frightened me at the time. Now, 9 years later, I'm circling back and feel ready to level up and away from any previous fear and doubt. What I do still have is respect but what I also have that I didn't have back then is trust.

I had to go through many eclipse seasons to rid myself of Christian religious programming for that trust to be able to blossom. I feel it was this programming that made it difficult for me to trust the connection with the spirits of the North. I'm very grateful to Arith Härger for his wonderful teachings and explanations of how many of the Norse myths were twisted when they were written down by Christian authors and how the Christian spin begun even before works like Snorri's Prose Edda were published. It is much easier to trust when things make sense intellectually as well as emotionally.

A couple of weeks ago, I decided to try another ritual inspired by Freyia Norling - the one to connect with the Vanir. That is when I was gifted the rabbit skull you see in the picture above and that now has pride of place on the staff I was gifted by Ymir today.

The rite or ritual I performed at dusk today, on the day of the New Moon solar eclipse, to connect with Ymir, the Thursar and the Jotunar was brief but powerful. I was catching the last of the light of the day so I couldn't stay out for very long or I wouldn't have been able to safely find my way back down the steep hill I had scrambled halfway up to perform the ritual.

I gifted Ymir a yoik (my most intimate soul connection in the form of voice) in addition to the suggested grains and berries. In spite of the brevity of the ritual, I quickly slipped into a trancelike state while chanting/yoiking. As soon as I had finished my ritual, I looked down and saw the staff on the ground. I had always known that I would find my staff when the gods felt I was ready and I am truly grateful that it happened today. I feel ready for a new beginning and to follow my calling as a Völva.